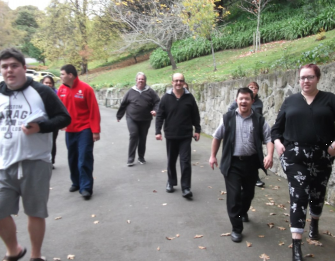 Initially Carson did not want to join in and it would be safe to say that he definitely preferred his own company over that of others. We were told that his idea of being sociable with other people was if he sat in the same room where other people were.

Through spending time getting to know Carson and his likes and dislikes we managed to get him to say hello to his coordinator staff when he arrived at DRC. This then was extended to other staff members and then the other clients.

Although there are sometimes moments when he does wish to be alone with his lap top, or locks himself in a room, these are few and far between now. We are so happy with his socialising progress and the positive changes he has made.

He is now actively participating and enjoying lots of different things and mixing in well with others. He’s budgeting his money and is more comfortable approaching shop keepers if he needs assistance and he is paying for his purchases himself. He is learning to accept change – even when it might be a last minute thing.
Some of the other things he’s been doing are:

Another great Easy Read document from People First New Zealand explaining what happens if a test says you have COVID-19,

We really appreciate that very important information is translated into Easy Read format so that the information is accessible to everyone. Thank you People First New Zealand

People First‘s Make it Easy team has put together an Easy Read document about what to expect if you test positive for COVID-19.

The document talks about things like COVID-19 symptoms, self-isolation, working from home while isolating, and accessing support in isolation.

People First will update the document if we hear any more information now Omicron is in the community.